R&R
Let me start by saying it's been a crazy amount of work for everyone getting Firestorm to where it is. After the release of 27000 myself and many of the developers were suffering from what is clinically known as  'Burn out'. We needed some time off... I needed some time off. For me it was about 6 weeks away before I started feeling ready to return to  cat herding, while some others took less, and some are simply enjoying the fresh air of this most wonderful time of year.
But fear not because we are back in gear now and shifting into overdrive!

New developers!
I'll start off the good news with the announcement and welcome to two new developers to our team.
Holy Gavenkrantz  has been a regular code contributor to Phoenix then Firestorm since very early on and I felt it only made sense to draw him in as an official developer. You see... after so many patches from a contributor it begins to only make sense that we ask if that contributor would like to join us. (hint hint)
Then there's  Armin Weatherwax (Arminweatherhax Resident in SL), formerly from Imprudence/Kokua. Armin was the main developer on the Kokua viewer for a long time and when I heard he was a free agent I approached him immediately. Armin really knows his stuff and we're very excited to have him on board with us!
Welcome to the team guys!

OpenSim
We've recently discovered that Firestorm has become the favorite viewer for other grids. I personally have had a LOT of grid owners approach me asking for improvements to Firestorm in OpenSim. Well, it just so happens that 'other grids' are where Armin excels, in fact I've put Armin in charge of that area from this point forward. In other words, Firestorm is going to extend its focus and improve support for other grids, however I must point out.. we cannot 'offer support' for other grids since there is just no way to stretch our support team out that thin into other grids. But what about the  Havok sub-license terms  stating the viewer cannot connect to other grids while having Havok?  Well we've thought about that and decided we're going to offer TWO versions of Firestorm. One for Second Life with Pathfinding Havok goodness, and one for other grids without Havok. We'll have more news about that soon.

New Release coming
More skins and skin customization improvements, new Windlight effects, Growl, Build floater improvements and options, ctrl/shift mouse wheel for setting custom default cam positions, brought back "remove scripts from selection", LSL PreProcessor!, improved functionality to estate tools, improved mouselook functionality, sound explorer, permanent derender, asset blacklist... loads of bug fixes, improvements and new features! The list goes on and on and on with too many to list! It's all coming folks!
But when.. you ask?  Well, we're getting close to the end of our 4.1.1 release targets which means we're getting very close! However, we're also kind of waiting for LL's pathfinding goodness so we can release with that stuff as well. As usual I cannot give you a release date, but I'll risk saying.. shortly after LL releases their pathfinding stuff, we'll release the next epic Firestorm update!

Things are moving along, it's all happening! Stay tuned!

Sincerely,
Jessica Lyon and the team. 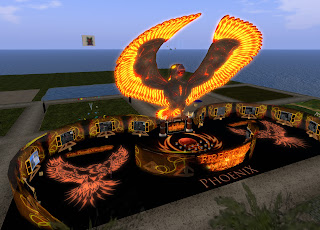